“Designers are storytellers”, we’ve often heard, but rarely do we dig down into what that really means. Narrative plays a huge, hidden role in the way we form memories and experience interactions—it’s the iceberg of UX, really—but how often do designers sit down and map it out, from the user’s point of view? How many of us actually bother to write the story?

Drawing on over a decade of design, writing and design-oriented content production, this talk argues that a strong narrative is crucial to creating “meaningful” user experiences, and offers a few techniques for crafting one. It also presents some surprising parallels between the writing process and the design process, exposing useful tools for both practices. 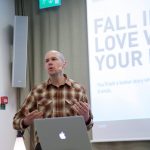 Carl Alviani is a Content Producer at Topp, and has been writing about the design process and its consequences for over a decade. His work has appeared in Wired, Fast Company, Forbes, Harvard Business Review, Gizmodo and Quartz, and he’s developed content and narrative strategy for clients ranging from Microsoft and Nike to major design schools and studios (including CIID, just over the bridge). Originally from the US, he holds a Masters in Industrial Design from the Pratt Institute in Brooklyn, and worked as a science teacher and a product designer before shifting over to writing.