A look at lessons learned from working with the rebranding of E.ON Nordic and how some issues were later addressed by sharing Sketch Libraries across the design team. We will discuss the challenges of running parallel projects for the same client with new designers being added at need. This will be a hands on demonstration of tools and methods used to quickly start up design projects that meet the standards for delivery. 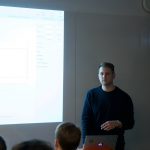 Fredrik Broman is a UX developer at KAN, where he currently spends much of his time building interfaces with Sketch and web code. He was tech lead for the recent rebranding of eon.se and manages the web front end components library for that domain. Previously a freelance creative and developer, Fredrik has worked with the web in some way or another since the last century.