What do design and filmmaking have in common? Everything it turns out. Many rules and best practices of filmmaking and visual storytelling that have been honed and established in the hundred year existence of cinema can inform and inspire many facets of UX design. As part of this talk we will look at some of these rules and how they translate to decisions made in interface design. 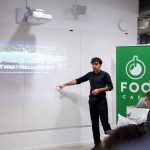